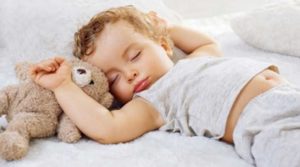 Naptime is equally as important as night sleep.  Different naps provide different  “nourishment” to the child.  During the morning nap, babies have more REM sleep (this is the stage connected with dreaming).  REM sleep is associated with brain maturation and growth.  The afternoon nap is linked with NonREM sleep, which is a deeper stage of sleep, and associated with psychological and physical restoration.

So how do parents know how often their child should be napping, for how long and when do naps end?  Below are some guidelines to help you along the way.  Hopefully by knowing these sleep requirements and patterns, you will be able to read your child’s sleep clues and help him get the rest he needs for healthy maturation and development.

Birth to Four Months: Newborns sleep a lot.  At this age the child is establishing good circadian rhythms.  The baby begins to associate external cues with sleep.  These outward signals include light versus dark, noise versus quite, and eye contact/play versus non-playtime.  It is important to learn your child’s signs for being tired, i.e., yawning, rubbing eyes, and use these signs as a guide for when to put your child to sleep.  The idea is to put your baby to sleep before the first signs of being tired appear. Until about five to six months of age, a baby should not be awake for more than two hours at a time.  Some babies are ready for sleep after only being awake for an hour or so; it is critical to learn your baby’s “comfortable” awake time and put your child to sleep accordingly.

Four to Six Months: During this time a baby’s sleep will become organized and more adult like.  The child’s body rhythms are in sync with his/her sleep/wake cycles.  By this age babies are taking three naps during the day. The final nap is usually very brief. The amount of time the child is awake between naps will vary, but should not be more than about two hours.  The optimal time for a baby to go to sleep is just before the outward signs of tiredness appear.  This is the ideal time to set up healthy sleep habits for your child.

Seven to Sixteen Months:  At this age the child is taking a morning and afternoon nap.  The baby can increasingly stay awake longer as they grow older. Typically, a child will take a morning nap three hours after wake up time and an afternoon nap following lunchtime. The baby will now be able to remain awake for the entire late afternoon stretch until bedtime.  An earlier bedtime may be necessary, at least temporarily, once the third nap is dropped.

Sixteen Months to Three Years:  Sometime during the first year, usually around 16 to 18 months, babies will drop to one afternoon nap.  Typically the child will be able to stay awake longer and longer in the morning, pushing the morning nap later and consequently the afternoon nap later.  Thus, the afternoon nap will need to be dropped in order to protect a healthy bedtime.  This “morning” nap will become increasing longer as well as occurring later in the day.  At first the nap will occur in the middle of the day to strike a balance between what use to be the morning and afternoon nap.  Slowly the nap will move until after lunchtime (about 12:30-1:00pm) where it will remain until the preschool years.

Three to Six Years: During this time the young child will drop the afternoon nap.  How this nap is dropped varies among children.  Some will take shorter and shorter naps while others will drop down to napping a few times per week.  Parents need to follow the child’s lead if possible.  This is not to say that once your child announces they no longer want to nap it is time to end napping.  Let your child’s behavior be your guide.  If s/he is no longer able to fall asleep at an appropriate bedtime at night, then you should begin considering altering the nap schedule. You can either try to wake your child earlier from his/her nap or drop napping to every other day.  Watch your child’s behavior for signs of overtiredness. Arrange a nap schedule that minimizes your child feeling overtired.

When it comes to creating healthy sleep habits the most useful guideline is your child’s behavior. Continually monitor your child for signs of being overtired.  Children’s sleep needs vary and change as they grow.  Starting at four months of age it is critical to have children nap in a crib or bed.  Motion sleeping (like in a stroller, car seat, swing or arms) will not allow the child to cycle through deeper phases of sleep and the nap proves to be less beneficial in its restorative quality.  Also, many parents tend to underestimate how much sleep their child requires to be able to function well.  Learning your child’s signals will steer you in the right direction for providing a healthy sleep schedule. For more support on how to create healthy sleep habits for your child please contacting me for a free consultation.

Schedule a Complimentary Call or Send a Message